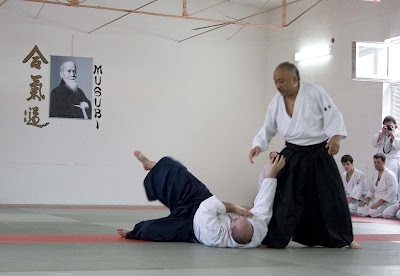 Aikido is defined by many wise masters and even practitioners as being more than just a martial art, but a way of life in itself.
If we think about it a sport, a martial art or even a different kind of activity is percieved differently by each individual.
When we consider Aikido, an experience that reveals the meaning of aikido or what it represents for each individual is the “stage”.
A very important international stage took place in Cluj, between 30 november and 1st December 2007, held by sensei Fujita, the last direct apprentice of O sensei still alive.
The stage for aikido practitioners is a sort of summer school. 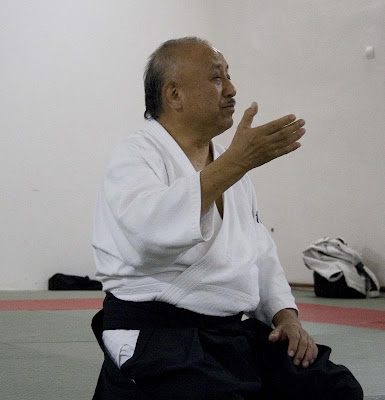 Training sessions take place in the early morning, first with the children or begginers and then with the more advanced and the black belts.
Although normally a training session lasts two full hours, here every group has an hour and a half allocated to them, but everything is a lot faster and much more intense than normal. You have the option to work with advance practitioners or black belts, thus the process of learning becomes much more efficient.
The early morning training begins at 10 AM and lasts almost until 1 PM, and the after noon training starts at 5 PM and is over at 10 PM, after the sensei gives the lectures.
Every training begins with relaxation and breathing techniques, the following techniques being like the first ones, but their difficulty level increases gradually.
The techniques learned were ranging from the basic four Tenkans, to advanced techniques such as Kotegaeshi.
What you learn and feel in this kind of setting as an aikido practitioner is unique and unparalelled.
Fujuta sensei is an example for all of us, not to mention having the possibility of practicing aikido in the same manner as the japanese people do it, and seing the techniques as being teached by O sensei.
A great addition to the training sessions are the lectures held by the sensei, from which I will quote as accurately as possible in the following sentences.
In the first lecutre held by the grand master, he tried to go through all the martial arts being practiced in Japan, and then described the origins of Aikido and the manner in which it must be practiced, its basics and the ideas that this martial art is founded on.
Sensei began by telling us that the modern japanese arts whose founders are well known are aikido and judo. He stated that besides these, the rest of the arts have so many teachers that identifying the founder is an impossible task.
Fujita sensei wanted to emphasize the fact that in Aikido there is no competition between the practitioners and there will never be an olimpic event related to it, and because of this Aikido is not a sport, but a martial art.
He also stated that there are 9 modern japanese martial arts, and other classical martial arts, but Aikido is the only one that allows no competition, and his oppinion is that no martial art should have competitions.
The Meiji restoration and the arrival of european sports in Japan have determined the transformation of martial arts such as Judo, Kendo, Karate, and Sumo into sports. Sensei breifly described the historical past of these arts, mentioning that Sumo really resembled a sport because of the fact that one could either win or lose at it.
Of all the japanese arts that have existed or have being borrowed during the different time periods (kiudo, naghinata, jiukendo etc.) Aikido is a japanese art that was born in Japan from other japanese arts.
The purpose of Aikido is surviving a fight, and also making sure that the attacker remains in good shape, it doesn’t really matter if you win or lose. This is the way in which O sensei concieved aikido.
O sensei was a practitioner of Jiujistsu, and also Kendo and other martial arts. There are old films in which O sensei demonstrates sword techniques, but these were part of his training and are not necesarily part of Aikido, and because of this Fujita sensei does not teach sword techniques. O sensei as well as a lot of practitioners enjoy swords, but the use of a Katana turns the martial art into a killing art. In Aikido the hands are not used as weapons, and because of this no weapons are used and no other parts of the body are used as weapons. This is the way of thinking derived from the harmony in Aikido. The instant one places his hand on a sword, one cannot speak about harmony anymore.
Another aspect that Fujuta sensei spoke about is the fact that degrees (kyu and dan) in Aikido come from an european way of thinking, and a diploma with a lot of dans on it has no value if the one who holds it is not training.
Sensei Fujuta also stated that it is very important to educate the children in the spirit of Aikido, and in this way wars and fights will eventually dissapear.
In the end the sensei advised us to correct out mistakes because we are not perfect after all, and to also treat every person as your equal and with the utmost respect.